yesterday was our 4th buddy walk!!!!   wyatt's first buddy walk was when he was 3 1/2 months old!!!  that first year we had a huge team walking for wyatt....over 50 people!  it was a tremendous show of support for our family during such a stressful time!   we also raised the most money that year! 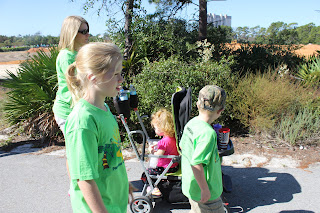 we have one family who has walked with us every year - our good friends, the wards!   jeff, christy, caleb (one of forrest's best friends), claire, connor and kate!   well....they almost walked with us every year; there was the year that they were registered to walk, and their precious kate decided to make her early appearance and they were in the hospital that year!   but they were still a part of our team! 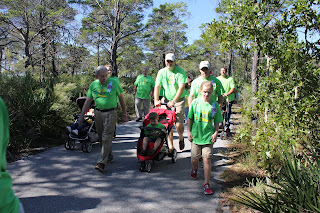 i don't think that the wards have ANY IDEA how much their support has meant to us through the years!    they have been good friends of ours for several years now, and we LOVE spending time with them!   but for them to take a saturday and commit it to supporting our family is just a very special thing! 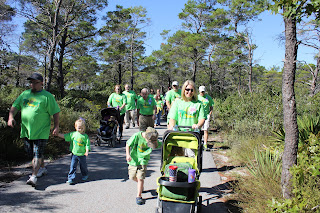 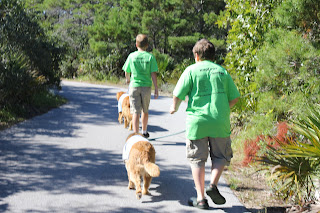 they are such a blessing to our entire family, and we thank God for them!!!! 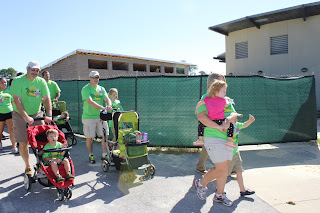 today was our 4th year to participate in the panama city beach buddy walk!!!   wyatt was so little that first year!!!!   3 1/2 months old!!!!  what a difference 3 years makes!!!!   that first year i was so nervous about seeing all those kids and adults with Down syndrome!!!   now i look forward to it!!!!
﻿﻿﻿﻿it was a beautiful day!   the t-shirts were designed by one of our own local adults who has Down syndrome, byron smith!!!   we had friends and family join us to celebrate our precious wyatt.... what a blessing!!!   we are so thankful for those who take the time to join us on this special day!
﻿﻿﻿﻿


and an extra special blessing.... wyatt won a hope haven (Ds clinic) evaluation!!!!  woo hoo!!!  hopefully hope haven will be able to fit us in sooner than next september, when we are scheduled to visit!!!   praise God!!! 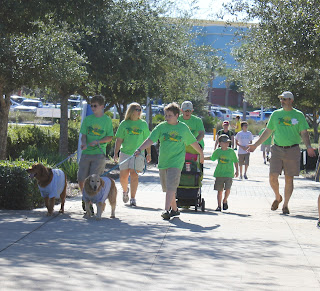 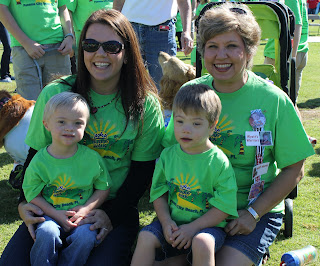 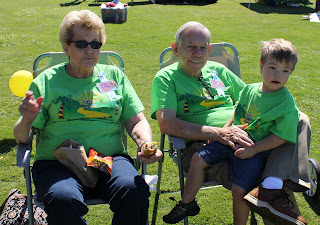 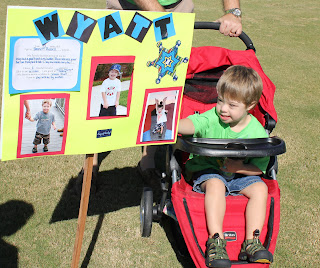 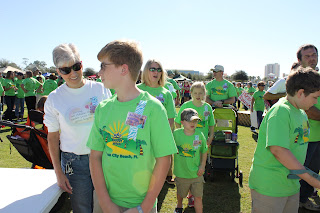 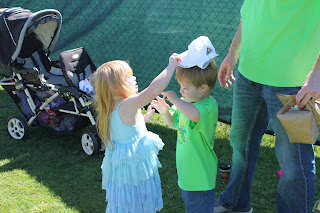 
wyatt's first haircut was probably his easiest haircut!   who wouldn't want their haircut at the "happiest place on earth"????    that's right, just after wyatt turned 1, he has his first hair cut at walt disney world's magic kingdom; at the barbershop on main street!   it was such a fun experience, and he did GREAT!!!

too bad that we can't go to disney for each and every haircut!!!   a friend of mine just posted that she is having to mentally prepare herself for her daughter (who has Ds) to get her haircut!   i SO understand this process!!!   wyatt now HATES to get his hair cut!!!  but with hair that grows as fast as his does, and is super thick, we MUST get haircuts regularly!
apparently we are not alone in this battle, many of my friends whose kiddos have Ds experience the same trauma that we do with each cut!   i must say that his last cut was the easiest so far, so i am hopeful that we will outgrow this!   during our last visit to hope haven, the Ds clinic in jacksonville, the educational consultant, laura, told me that her adult son, who has Ds, was the exact same way growing up!    she also gave me some pointers!

for many kiddos, the aversion to a haircut stems from sensory issues.  not wanting someone to touch their hair or not wanting anyone in their personal space can have a lot to do with it.  for wyatt, we believe it has a lot to do with the noise level associated with haircuts, especially when electric trimmers are involved (and many barbers cut kids hair completely with trimmers!)   laura told me that a solution they found was a lady barber who was willing to open her shop early just for them, and would cut his hair with scissors mainly!

praise God that we have a barber friend who we went to church with who was willing to do just that!   ms peggy sue meets us early before she opens her shop; we try not to talk and laugh much, no loud music blaring, with disney channel going for wyatt to watch!   and she uses scissors as much as she can!!   what a blessing!   although it is not "easy breasy," it is much better than before we started our early morning visits!!!   we thank God for our friend who works with us to cut our little man's hair, and who prays over his appointment as well!


Down Syndrome Society of West Florida 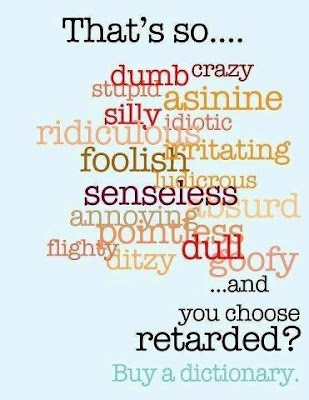 i've blogged about it many times in the past, i know!   in case you missed this post, "you're gonna argue with me about this?  seriously??"  , it's pretty significant concerning the attitude i have encountered in the past about this word.
unfortunately i keep hearing the word "retarded".   it's really not that hard to stop saying it, you know!   the graphic above  gives you lots of ways to expand your vocabulary so you can break that nasty habit of calling things and actions "retarded!"﻿ 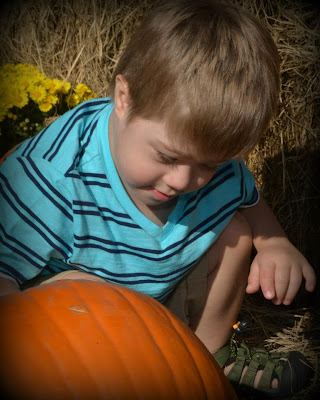 Posted by Penny's Peeps at 5:02 PM No comments:

Email ThisBlogThis!Share to TwitterShare to FacebookShare to Pinterest
Labels: down syndrome, the r word, wyatt 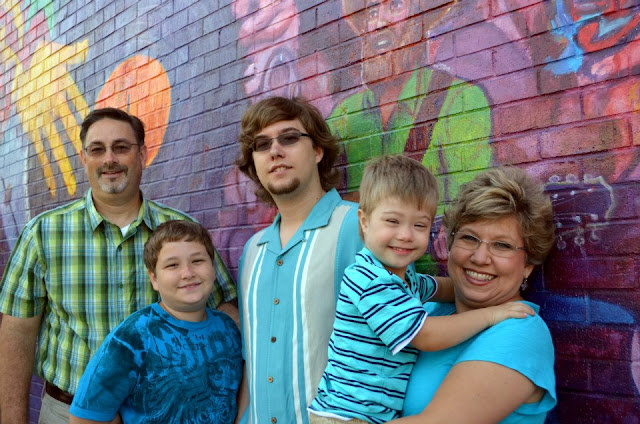 we were blessed to be able to have family portraits taken this past sunday afternoon; my friend amber taylor took these wonderful pics!   we met online a few years ago when she was pregnant with her sweet baby girl violet, who also has Down syndrome!    we met IRL last year as well, and now only live about 1 1/2 hours apart!   we had a great time taking these pics, and i love them and wanted to share them with you!!!   i'll share more soon!   blessed! 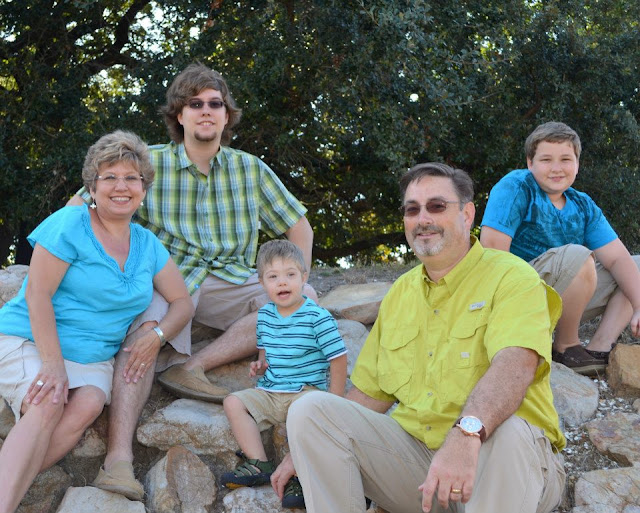 Email ThisBlogThis!Share to TwitterShare to FacebookShare to Pinterest
Labels: down syndrome, family, friends 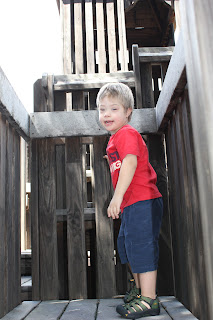 i know that i have blogged about this before, but just recently (even today) i have noticed it more and more..... i hate it when people are looking at wyatt, *trying* not to stare, and then avert their eyes when i "catch" them.  mind you, i am not frowning and angry.... i am smiling, happy, and ready to engage them in conversation when i see them looking at wyatt!    it is just beyond my comprehension how someone cannot smile when they see my precious boy!   he's more alike than different, people!!!!

of course it doesn't happen all the time!  maybe just a third of the time do people behave this way.  the othere two-thirds of the time, people will at least smile, at most engage in a conversation with me!  when i notice someone really interested in wyatt, i will ask them something like "oh, do you love someone with Down syndrome too?", which is a great conversation starter!    i often find that they have a family member or family friend who has Ds, and often a story to share! 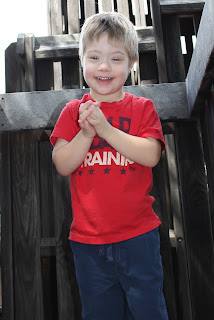 even today an older man engaged us in a lengthy conversation; he taught children with special needs for many years in the public school system.  he asked all types of questions about wyatt, and was genuinely interested in him!  it was a lovely conversation!   he wished us well when we parted.....

you see, i LOVE to talk to people....all people!  i love to admire their precious babies and children too!    i guess that's why i have such a hard time understanding someone not even smiling at our precious boy.  i know that before we were blessed with wyatt i probably stared from time to time at folks with disabilities as well; i wish that i had known better then!  but i have learned that we are ALL more alike than different!  created in the image of God, just as HE intended us to be!   blessings....
Posted by Penny's Peeps at 10:59 PM 1 comment:

Penny's Peeps
Pace, Florida, United States
i have been married to my best friend tim for 24 years, and am a SAHM to 3 wonderful sons; ethan, forrest and wyatt; a college student, a cool kid and a toddler who happens to have a little something extra, Down syndrome. my faith is the most important thing in my life; i am a Christian, desiring to honor God in every area of my life!

Will You Take the Pledge for Wyatt and His Friends?

"'For I know the plans I have for you, ' declares the Lord, 'plans to prosper you and not to harm you, plans to give you a hope and a future.'" Jeremiah 29:11